When I think about torture, which I do often, I think of Connie Francis and Milwaukee. It’s not their fault. They’re a fine enough pop singer and city, respectively. It’s just that I can’t help but associate them both with torture.

“Lipstick on your collar

Told a tale on you-woo.

Lipstick on your collar 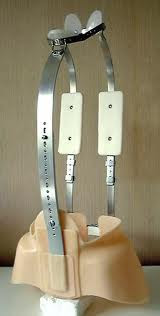 For those who can’t see, it’s a plastic girdle that fits around the pelvis and hips. A vertical metal bar runs up the front to just under the chin, where a padded perch rests. Two similar bars run parallel up the back to behind the skull, where there is a padded headrest. The idea was to prevent scoliosis.

I remember when I was fitted for my Milwaukee brace there was a sling hanging down from a little crane above my head and the brace maker secured the sling under my chin and cranked me up until I dangled just above the exam table. And then he wrapped plaster around my trunk. I felt like a fucking piñata! I kept expecting kids to burst into the room and beat me with sticks.

When you wear a Milwaukee brace, you feel like you’re wearing a barrel. You feel about as sexy and attractive (and agile and nimble) as a guy wearing a barrel, too. And you’re supposed to wear it 23 hours a day every day forever, only talking it off to bathe.

When I went away to college, living on my own in the dorm, I ditched the Milwaukee brace.

Generations of cripples have experienced this form of torture. It gives me a notion to start a new annual ritual: Smart Ass Cripple’s Good Old Fashioned Down Home Brace Burning. I’ll build a huge bonfire. Cripples from all over the universe can come, bring all their old albatross braces and throw them in. Then we all dance naked.

It will be intensely therapeutic. It will help me exorcise those nightmares of an adolescence spent squeezed into a Milwaukee brace, listening to Connie Francis.
Posted by Smart Ass Cripple at 6:18 PM 11 comments:

Got a question? Want a smart ass answer? Send your question to Ask Smart Ass Cripple at asksmartasscripple@gmail.com. Smart Ass Cripple is quick to spout an opinion on any topic, whether he knows anything about it or not.